How to Change Your Region on Steam using a VPN

With a Steam VPN, you can change your region easily and access new games, better deals, and discounts unavailable in your area.

Steam is a popular online gaming platform with one of the biggest gaming catalogs on the internet, with more than 23,000 titles. You can gain access to all of these by changing your virtual location with a VPN.

What’s more, a VPN can improve your overall experience on Steam. From preventing DDoS attacks to stopping bandwidth throttling, there is a lot a VPN can do for you.

This article is a guide to changing your region on Steam with a VPN. Here is everything you need to know.

Our Favorite VPNs for Steam

How to Change Your Region on Steam with a VPN

Short on time? Here’s our quick guide to changing your region on Steam using a VPN. The first thing you need to do is get a VPN that works with Steam. We recommend choosing one of the services from the list below.

Download the VPN onto your PC or Mac, using the relevant installation files. The setup process should be fairly easy, especially if your VPN offers a dedicated app for Windows and Mac systems.

After setting up the VPN, open up the client. Find the server list and connect to a server in the country you want to change your Steam region to. 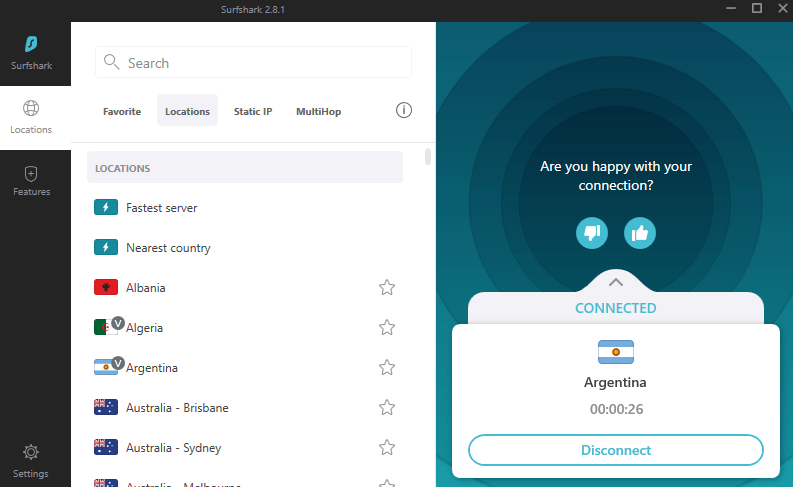 Once your connection is active, open up Steam and add a game to your shopping cart. You don’t need to complete the purchase, but open the cart and select the ‘Country’ tab next to the game.

From the drop-down list, select the region you wish to change to. This will automatically change your Steam region; you’ll know the process is complete when the currency value updates.

You can also change your region via your account details by updating your store country. However, you’ll need to make a purchase in that new country’s currency to confirm your region.

You’ll need to have a valid payment method and billing address for your new country. Fortunately, you can use PayPal on Steam, and change your currency via the PayPal app.

Remember, you can only change your Steam region every three months so make sure you pick the right country each time!

NordVPN is one of the most popular VPN services on the market, and a great choice for Steam users. The VPN offers extremely fast connection speeds on its NordLynx protocol, which is great for gamers. This means that you can leave the VPN running in the background of your PC or Mac without it slowing down your connection.

NordVPN has a large server network with more than 5,000 servers across 60 countries. This means you have countless options when it comes to changing your Steam region.

Most Steam users will look for a VPN that will protect them from DDoS attacks, and NordVPN does just that with military-grade AES-256 bit encryption. Although no Virtual Private Network will offer 100% protection against such risks, NordVPN does promise to mitigate more data than your normal ISP connection.

Also, if privacy and anonymity are one of your main priorities when choosing from Steam VPN options, NordVPN comes with a transparent no-logs policy. No one will know what you’ve done on Steam with the VPN.

NordVPN isn’t just great for changing your region on Steam and unblocking games; it also boasts over 4,000 optimized streaming servers in case you want to access geo-restricted content on Netflix and other streaming sites.

ExpressVPN is one of the best Steam VPN services since it uses obfuscated servers. This hides your VPN from third parties, making it easier to use the VPN on Steam. With more than 3,000 servers across 160 locations in 94 countries, you’ll be able to change your region on Steam without issues.

ExpressVPNs connection speeds are some of the fastest available so you can find a super-fast server no matter where you are in the world. Tunnel your Steam data over the Lightway protocol to ensure you have stable and fast speeds at all times.

If you are worried about DDoS attacks, ExpressVPN offers a host of advanced security features to ensure you’re protected. There is military-grade encryption and a kill switch called the Network Lock.

The VPN impresses when it comes to app support, too, with intuitive, dedicated apps for Windows, macOS, iOS, Android, and Linux. With 5 simultaneous connections per plan, you will be able to use the VPN on your Steam devices and additional systems.

If you want to use a VPN to also unblock streaming content, ExpressVPN is an excellent choice. It seamlessly unlocks a host of popular streaming services like Netflix, Amazon Prime Video, YouTube, Hulu, and more. You can watch your favorite overseas content without limits.

Unfortunately, these benefits do come at a slightly higher price than most others on the market. However, if you’re not completely happy with the VPN, you can request a full refund within 30-days.

If you are looking for the best VPN for Steam when it comes to affordability, Surfshark is an excellent option. Cheap does not mean you’ll have to sacrifice quality either; Surfshark offers a host of advanced security features as well as unlimited simultaneous connections.

The VPN may not offer the same number of servers as NordVPN, but it still offers 3,200 VPN servers across more than 60 countries. You will still have plenty of choices when it comes to updating your Steam region.

Surfshark is fast on long-distance servers, especially if you use the WireGuard protocol. Surfshark’s clients are all straightforward to use, meaning you can easily adjust protocol settings on your PC or Mac.

Surfshark operates on military-grade encryption. There is a host of advanced features, including MultiHop, which will allow you to re-route your internet traffic through two servers for an additional layer of protection against DDoS attacks.

You’ll get split tunneling with Surfshark which is useful if you need to separate your connections when playing Steam. The VPN also overcomes geo-blocks on popular streaming sites, including Netflix, Hulu, Disney+, and Amazon Prime Video. There is support for torrenting too.

IPVanish is one of the best VPNs for Steam as it comes with a range of specialized gaming features. There are fast connection speeds, too, meaning that you can access your favorite Steam games without ever worrying about lagging or buffering.

IPVanish operates its own VPN network and software, meaning that there is no need for third-party intervention at any stage. There are over 1,700 servers across 70 countries meaning you have plenty of server options when it comes to changing your region

IPVanish allows you to sort through servers depending on ping time, which can help you find the best available server with fast speeds. Users can also sort servers specifically designed for gaming, which is perfect for Steam.

There is support for a wide range of powerful protocols and DNS leak protection as well as a choice of OpenVPN ports. Your security will be safe on Steam with IPVanish VPN.

Hotspot Shield delivers excellent performance and unrivaled speeds thanks to using the Catapult Hydra protocol. You won’t need to worry about slow connections, even on long-distance VPN connections.

You can choose from any of Hotspot’s 3,200 servers around the world to connect to. This allows you to change your region easily on Steam, and you can establish connections on Hotspot in just a few seconds.

Hotspot Shield comes with dedicated apps for Windows and Mac. The apps are well-designed and simple to use, even if you’re a beginner VPN user.

Hotspot Shield offers a generous, industry-leading 45-day money-back guarantee. There is also an impressive free version if you want to test the service before committing to a paid plan.

Benefits of Using a VPN for Steam

The main advantage of using a VPN on Steam is the fact that you can change your region. This enables you to download geo-restricted games and buy games at a lower price. Steam uses local pricing, meaning that a game in Europe may cost more than the same game in the United States. By using a VPN, you can overcome these local price restrictions.

VPNs don’t just help change your country on Steam. They add a layer of encryption over all of your gaming activities, which offers privacy as third parties can’t view your gaming data. Moreover, your real IP address will be hidden which protects you from DDoS attacks during gaming. You’ll also hide your data from your ISP so that your bandwidth isn’t purposefully throttled during gameplay.

Yes, Steam is geo-restricted. Valve, the company that owns Steam, has made it harder for users to spoof their location to overcome these geo-blocks. Now, users can only change their region once every three months. Moreover, users will need to provide proof of their location such as a billing address and local currency payment form.

However, our guide above explains how you can easily change your region on Steam with a VPN and buy games from another country.

Can You Get in Trouble for Using a VPN for Steam?

It is against Steam’s subscriber agreement for users to employ geo-spoofing software (like VPNs) to change their region to buy games. If you are caught using a VPN to change your region to get cheaper prices or access to geo-blocked games, your account could be banned.

However, using a VPN while playing games on Steam is not against the terms of use. So, if you’re using a VPN for Steam to prevent ISP bandwidth throttling or for protection against DDoS attacks, you won’t get in trouble with the gaming platform.

Using a Free VPN for Steam

You can absolutely use a free VPN for Steam. Whether you should or not is a different question. There are limitations and downsides to free VPNs that all Steam users should be aware of.

Tuxler and Hola VPN are good free VPN options if you want fast speeds and unlimited bandwidth when gaming. However, these two VPNs offer less security since your traffic is sent via another user’s device; this means that other people can use your IP address. As well as this, there isn’t a strict no-logging policy in place.

So, while there are advantages to using a free VPN for Steam, such as not paying for a subscription, there are disadvantages too. It’s up to you whether you use one or not.

PrivacySharks » 10 Best VPN Services of 2022 » How to Change Your Region on Steam using a VPN
Last updated: June 27, 2022
We use cookies (including third party cookies) to secure the website’s functions, statistics and marketing on third party websites. When using the site you accept that we collect and process your personal data for profiling and targeted advertising. By continuing you accept our cookie- and privacy policies. Read more.
OK