What is a VPN Kill Switch and How Does It Work?

Essentially, a VPN kill switch cuts off internet access if the VPN connection drops, ensuring a user’s internet traffic is never exposed without VPN protection. However, this explanation is a little vague and doesn’t go into detail about just how a kill switch works.

To help you understand exactly what a VPN kill switch is read our in-depth article, and find out which VPNs offer a kill switch.

What is a Kill Switch?

To understand what the kill switch is, you need to first understand how a VPN works. With a VPN, people connect to a remote server, which sends their internet traffic via a VPN tunnel. This tunnel hides your real IP address and all internet activity from third parties, such as hackers, Internet Service Providers (ISPs), and online trackers. This gives users absolute online privacy.

Sometimes, for whatever reason, the VPN connection drops. When this happens, your internet data will no longer be traveling through the secure VPN tunnel. Instead, your online activity will be completely unprotected and visible to any interested third parties.

The kill switch is a feature that prevents your data from being exposed if the VPN connection fails. When the VPN software detects a connection drop, the kill switch will immediately launch into action and cut off your internet access. This means you won’t accidentally share your activity.

Fortunately, the kill switch only stops your internet access momentarily. You’ll be reconnected to the internet when the VPN server connection is reestablished.

How Does a VPN Kill Switch Work?

Now you know what a VPN kill switch is, here is how it works in detecting server drops to keep internet connections private.

When the kill switch is active, it is constantly working in the background and scanning your VPN connection in real-time. By doing this, it can check for any server interruptions, network changes, or IP address changes.

If at any point, a network or server disruption is detected, the kill switch will trigger an action that blocks your internet access entirely.

How to Use VPN Kill Switch

Knowing how to use a VPN kill switch is essential to ensuring you remain private online at all times. Fortunately, it is extremely easy to use the VPN kill switch. Once you have downloaded the VPN software onto your device you need to open the app, navigate to the app settings, find the kill switch feature and toggle it ON.

Some VPNs will have the kill switch automatically activated but it is still a good idea to visit the settings and check it is running.

Why Do You Need a VPN Kill Switch?

While it’s true that most VPN networks are reliable services, no product is entirely perfect, and issues can sometimes occur, causing your VPN connection to drop.

When such a moment occurs, your VPN provider cannot guarantee that the users’ information is always 100% safe. This is where the VPN kill switch comes into play; it ensures that your internet connection cuts out when your VPN connection goes down. Here’s why a kill switch is essential.

Without the kill switch, your browsing data and real IP address could be exposed. If you’re using P2P networking sites, using a VPN to access blocked websites, or connected to a public Wi-Fi network, you are exposing yourself to many risks if the VPN connection drops.

Kill switches are an extra layer of security for when your VPN connection cuts out. Without one, hackers, ISPs, and others could spy on your actions and steal your data.

There are plenty of paid and some free VPN providers that offer a kill switch feature or a kill switch equivalent with their software. Most VPN kill switches are activated by default, but if not, users can enable them with just one click.

We’ve listed the best VPNs with kill switches below, so you can find a service that works for you.

Does NordVPN have a kill switch? Yes, it does! NordVPN is one of the most popular VPNs on the current market for several reasons: advanced security, military-grade encryption, a choice of secure protocols, DNS leak protection, a strict zero-logs policy, and built-in malware protection.

Not only this, but NordVPN can bypass geo-restrictions and give you access to censored content on the web. Thanks to its obfuscated servers, you can use the VPN in some of the most restricted places like China. Fans of Netflix can also bypass the streaming service’s firewall to enjoy unlimited online content.

Nord has dedicated apps for many different platforms, including Windows, macOS, iOS, Linux, and Android. You can easily activate the kill switch, and many other useful features, in the app’s settings. Customer support is available 24/7 should you run into any issues, and you can get in touch with the VPN service and its support team via a live chat or email ticket system.

ExpressVPN is a paid VPN service that gives you the freedom to switch between 160 server locations in 94 countries while keeping your IP address and data safe. It works with Windows, Mac, mobile, tablet devices, routers, consoles, and Smart TVs.

Should your VPN connection ever go down, ExpressVPN’s kill switch, known as the Network Lock, will kick in to cut off your internet access and keep your real IP address private. The great thing about the Network Lock is that it is automatically enabled upon download, so you don’t need to worry about activating it. You can simply start surfing the web with utter peace of mind.

There is one downside to ExpressVPN’s Network Lock: it is only available on the provider’s Windows, Mac, Linux, and router VPN apps. Android and iOS users cannot take advantage of this integral feature which is disappointing. If you use your cell phone a lot in public, connecting to public wi-fi networks, then your internet connection may be at risk without a kill switch.

Fortunately, ExpressVPN offers great security in other ways; military-grade encryption, super-secure protocols including the Lightway protocol, and a zero-logs policy.

Another VPN service that we like that offers an excellent kill switch feature is CyberGhost. This VPN provider is based in Romania and is big on internet privacy and security. Therefore, it makes sense that the VPN has a great kill switch that works well.

We ran some kill switch tests and found that CyberGhost’s kill switch was 100% effective every time, cutting off our internet access whenever the VPN connection cut out. Our real IP address was never exposed, and neither was our traffic.

CyberGhost has VPNs apps for all of the most popular operating systems and Amazon Fire TV, and Apple TV. This means that your Internet Service Provider (ISP) need never know that you’re watching TV with a VPN since the kill switch will kick into action should your VPN connection ever go down.

What’s more, with CyberGhost, you have access to a large VPN server network consisting of more than 7200 servers across 90+ countries. Internet freedom is possible with this provider as you can bypass geo-restrictions and access websites prohibited in your country.

Another great provider with an excellent VPN kill switch is Surfshark. This VPN service has a kill switch to ensure your web traffic stays traffic, and your internet access will cease as soon as there is any interference with your VPN connection.

The VPN kill switch isn’t the only security feature Surfshark employs to protect user browsing data. Customers also can enjoy several different modes, such as Camouflage Mode, which allows you to hide the fact you’re using a VPN. You can also employ the NoBorders mode to enjoy the VPN in restricted regions.

MultiHop is another feature we like since it enables users to tunnel their VPN connection via several servers in many different countries. This adds several extra layers of privacy to your VPN connection, meaning that your real IP address and identity will be hidden from snooping eyes.

Surfshark offers unlimited simultaneous connections and works on a whole host of operating systems. It is one of the cheapest VPNs on the market, assuming you buy one of its long-term plans.

Hotspot Shield rounds off our list of the best VPN kill switch. Not only does the VPN’s Premium plan include a VPN kill switch, but its free version also includes this integral feature. Therefore, you can use the VPN for free and enjoy first-rate security such as advanced encryption, an automatic VPN kill switch, and excellent protocols.

For Premium users, the features on offer are excellent. There is unlimited bandwidth and data, which is great for torrenting and streaming fans. Moreover, you can enjoy 24/7 customer support that includes a live chat and an email support service.

Paid users also can access more restricted content on the web and bypass geo-limitations. While Hotspot Shield is based in the USA, a member of the Five Eyes, it operates a strict no-logs policy. This ensures that your activity on the servers will never be stored or shared.

To try out this VPN’s kill switch and see if it blocks your internet connection should the VPN connection drop, you can test out Hotspot Shield for 45 days, thanks to its extremely long refund policy. 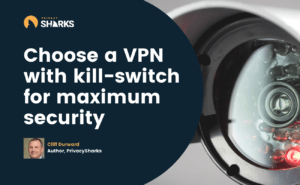 Do I Need to Activate the Kill Switch?

If your VPN offers a kill switch, it may not be enabled by default in the app or client. It’s usually a simple click away, though some of the best VPNs out there do have it enabled in their system automatically, like ExpressVPN.

Many factors cause a VPN to disconnect. For example, network changes and disruptions can cause the VPN to drop and the kill switch to spring into action. As well as this, network firewalls which block the VPN connection can stop the VPN tunnel from being established.

Server issues can also contribute to VPN disconnections. Sometimes servers simply fail, or time out due to heavy server loads.

Do Free VPNs Have a Kill Switch?

If you are using a free VPN, then you might have to do some digging to make sure a kill switch is available. Free doesn’t necessarily equal the top tier of internet network security, but it doesn’t mean free VPNs are no good. In fact, some free VPN versions have incredible security features, though it is rare.

PrivacySharks » 10 Best VPN Services of 2022 » What is a VPN Kill Switch and How Does It Work?
Last updated: May 10, 2022
We use cookies (including third party cookies) to secure the website’s functions, statistics and marketing on third party websites. When using the site you accept that we collect and process your personal data for profiling and targeted advertising. By continuing you accept our cookie- and privacy policies. Read more.
OK