How to Change VPN to New York, United States

This guide features a step-by-step guide to changing your location to New York, United States using a VPN with servers in NYC.

Having your virtual location set as New York offers many benefits. You can unblock US-restricted streaming content and carry out valuable market research for your business. Best of all, using a VPN can protect your internet traffic if you reside in the Big Apple.

As well as explaining how to change your location to New York with a VPN, we’ve also listed the best VPN services to offer New York servers.

How to Change VPN Location to New York

Regardless of your reason for wanting to change your virtual location to New York, it is extremely easy to do so. You’ll first need to get a VPN subscription with a service that offers New York servers and download the necessary app or software onto your device.

Most VPNs come with dedicated apps for various operating systems which makes it easy to change location to New York. You just need to open the app, find the server list, and connect to a server in New York City. Most VPNs allow users to filter servers by city, not just country so that you can get a real New York IP address. 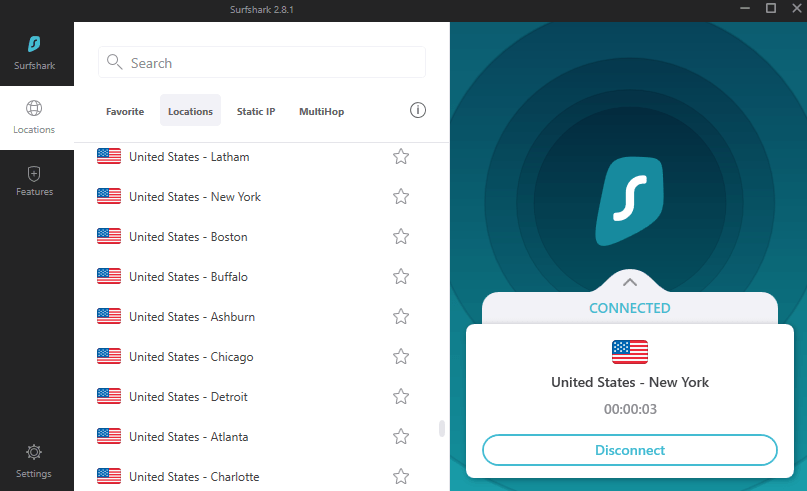 If you set up the VPN manually, the process of changing your VPN to New York will differ depending on the device you use. For example, for manual New York server configuration on Windows, you’ll need to download your VPN’s appropriate configuration files.

For Linux distro users, you’ll need to enter the correct command on the command line app to change your VPN connection. You’ll find this on your VPN provider’s website.

When you have successfully changed your VPN location to New York, you’ll have a real New York IP, and be able to surf the web as though you are physically based there.

A VPN that offers New York IP addresses also needs to have great privacy features and easy-to-use apps. Fortunately, all the services listed below come with the essentials that you need to have a great VPN experience and change your location to New York.

NordVPN offers more than 5,300 servers on its large network, including servers in New York. You can connect to a NY server in the NordVPN app by clicking on the three dots next to the United States server location and selecting New York.

With NordVPN, you can also get a dedicated New York IP address. This means that only you will have access to that particular IP, and won’t need to share with other users. However, shared NY IP addresses make your traffic more anonymous.

You can easily overcome firewalls with NordVPN by connecting to a New York server. This is because its NY servers use obfuscation, to hide your VPN usage from third parties. You’ll be able to overcome Netflix blocks and watch geo-restricted content.

All of NordVPN’s servers come with excellent privacy features such as AES-256 bit encryption and Double VPN technology. Double VPN sends your internet traffic through two different VPN servers rather than just one for an extra layer of privacy. This changes your IP address twice for more privacy.

If you’re a fan of torrenting, you can connect to one of NordVPN’s New York servers. All of these support P2P networking, and the additional privacy features will keep your data secure and hidden.

Connection speeds are great too. If you connect to a New York server from far away, make sure to use NordVPN’s proprietary NordLynx protocol which combines powerful speeds and strong encryption.

Nord’s VPN apps are well-designed and easy to use, even for a novice VPN user. There is support for 6 simultaneous connections too meaning that you can get a New York City IP address on all your devices.

CyberGhost is an excellent VPN for New York since it operates 525 servers in the city. This means you have many IP address options when it comes to changing your location to New York City. As well as this, CyberGhost has over 1,300 other servers in the US.

With CyberGhost, you can unblock many streaming sites in the US when you change your location to New York. The VPN unblocks many services including Netflix, Hulu, HBO, ESPN+, and Amazon Prime Video. CyberGhost also supports P2P networking, meaning you can torrent with a US IP address.

If you live in New York and want a VPN for New York to enjoy more privacy, then CyberGhost is a good option. There is military-grade encryption on all NY servers, meaning your data is hidden. Furthermore, CyberGhost VPN has a strict no-logging policy and comes with additional security features like a kill switch.

With every CyberGhost plan, you get 7 simultaneous connections. This means you can have a New York IP address on your phone, and connect to another location on your computer. If you work in marketing and need to research foreign markets, CyberGhost is a good option as you can have a different location on all of your devices.

If you want to change your VPN to New York, ExpressVPN will allow you to do so with ease. With access to a range of 3,000 VPN server locations and 2 servers in the state of New York, you can get a NY IP address with just one tap of the app.

ExpressVPN is a great choice if you want to access geo-restricted content in New York. It even offers a MediaStreamer DNS, which enables users living in other US states and countries to get a NY IP and unblock local sports games and more.

You’ll enjoy impressive connection speeds with ExpressVPN thanks to its Lightway protocol. This means that even if you connect to a New York server from far away, you won’t notice reduced speeds.

For native New Yorkers who want to hide their data from the prying eyes of network providers and government agencies. There is AES-256 bit encryption to jumble up your data and make it unintelligible. As well as this, ExpressVPN uses private DNS on its servers to protect DNS requests and IP leak protection.

ExpressVPN’s no-logs policy also ensures that nothing you do while using the VPN is stored anywhere. This means, all your internet traffic when connected to a New York server won’t be stored on the provider’s network.

The VPN apps and browser extensions are extremely user-friendly. If you live in New York, you can use the Quick Connect button and get connected to the fastest nearby server in seconds.

There are just 5 simultaneous connections available per subscription plan; however, if you want to overcome these and have a NY IP address on all your devices, you can just use the router app. 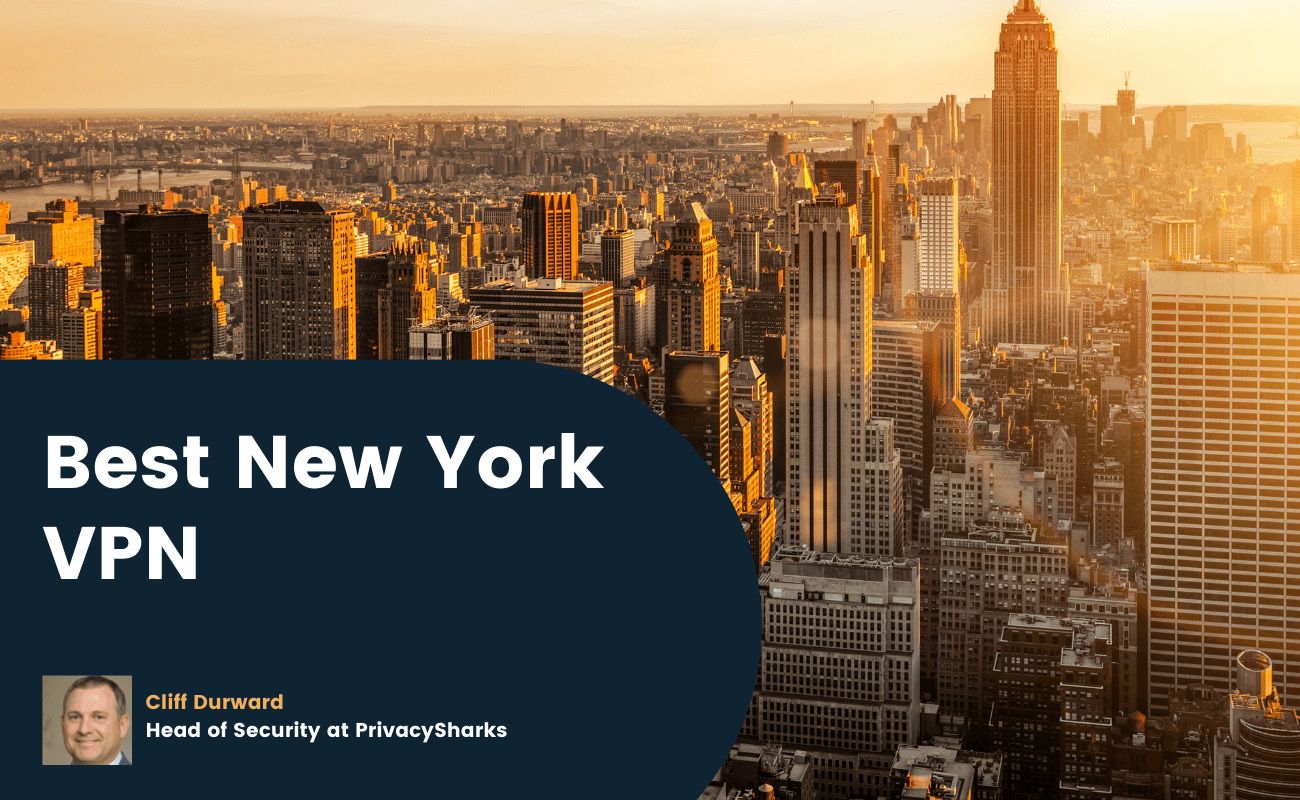 The Benefits of changing your VPN location to New York

There are so many reasons to change your VPN to New York City. Firstly, with a New York IP address, you will be able to unblock content that is only available in the city or state. For example, you’ll be able to watch live geo-restricted New York Knicks games without missing a minute of the action. Furthermore, users living outside of the US can change their VPN location to New York and unblock American media content like Netflix, Hulu, and more.

New York is also a hub for business, and many marketing companies rely on VPNs to research trends evolving in the city. With access to an IP address in New York, you can create better marketing campaigns and carry out product research.

If you live in New York, want more internet privacy, but for your location to stay the same, then you can still connect to a New York server. This won’t affect your speeds since your data isn’t traveling to another country, but you will enjoy total privacy. Sending your internet traffic via the VPN will encrypt it and hide it from US network providers and government agencies looking to watch your online activity.

Furthermore, if you constantly connect to public networks in New York, you’ll benefit by connecting to a New York server. Your location will remain the same, but you’ll be hiding browsing activity from hackers that peruse open and public Wi-Fi hotspots, looking for potential victims’ data.

Is it Legal to use a VPN in New York?

Yes, a VPN for New York is 100% legal. You can use a VPN in all US states, so long as you are not using one for illegal purposes. For example, if you’re using a VPN to hide activities such as selling illegal goods on the dark web, or downloading and sharing illegal materials, you could face severe repercussions.

We always advise our readers to remember this nugget of advice when using a VPN: if you wouldn’t do it without a VPN, don’t do it with one. It’s that simple.

To change your virtual location to New York, you can use a free VPN. Many, if not most, free VPNs offer New York-based servers, meaning you can get a New York IP for free. ProtonVPN is the best free VPN with New York servers. It offers free locations across the US and comes with unlimited bandwidth meaning you can constantly have a NY IP address.

Unfortunately, there are downsides to ProtonVPN’s free service, that many other free VPNs suffer from. There are slow speeds with ProtonVPN’s US servers and the inability to unblock certain websites, like streaming services. Many other VPNs suffer from this issue, such as Hotspot Shield’s free VPN service. Furthermore, Hotspot Shield and PrivadoVPN’s free versions come with data limits, meaning you cannot use the VPN as much as you’d like to.

Tuxler VPN and Hola VPN are two good free VPNs if you only want a New York IP address but aren’t as concerned about privacy. While these two VPNs claim to offer privacy protection, they don’t live up to the security features offered by premium VPN services.

By changing your VPN location to New York City, you'll enjoy access to local sports events, be able to unblock US websites, and hide your browsing data. Even if you live in New York, you'll be able to reap the benefits of a NY VPN.

PrivacySharks » 10 Best VPN Services of 2023 » How to Change VPN to New York, United States
Last updated: June 27, 2022
We use cookies (including third party cookies) to secure the website’s functions, statistics and marketing on third party websites. When using the site you accept that we collect and process your personal data for profiling and targeted advertising. By continuing you accept our cookie- and privacy policies. Read more.
OK